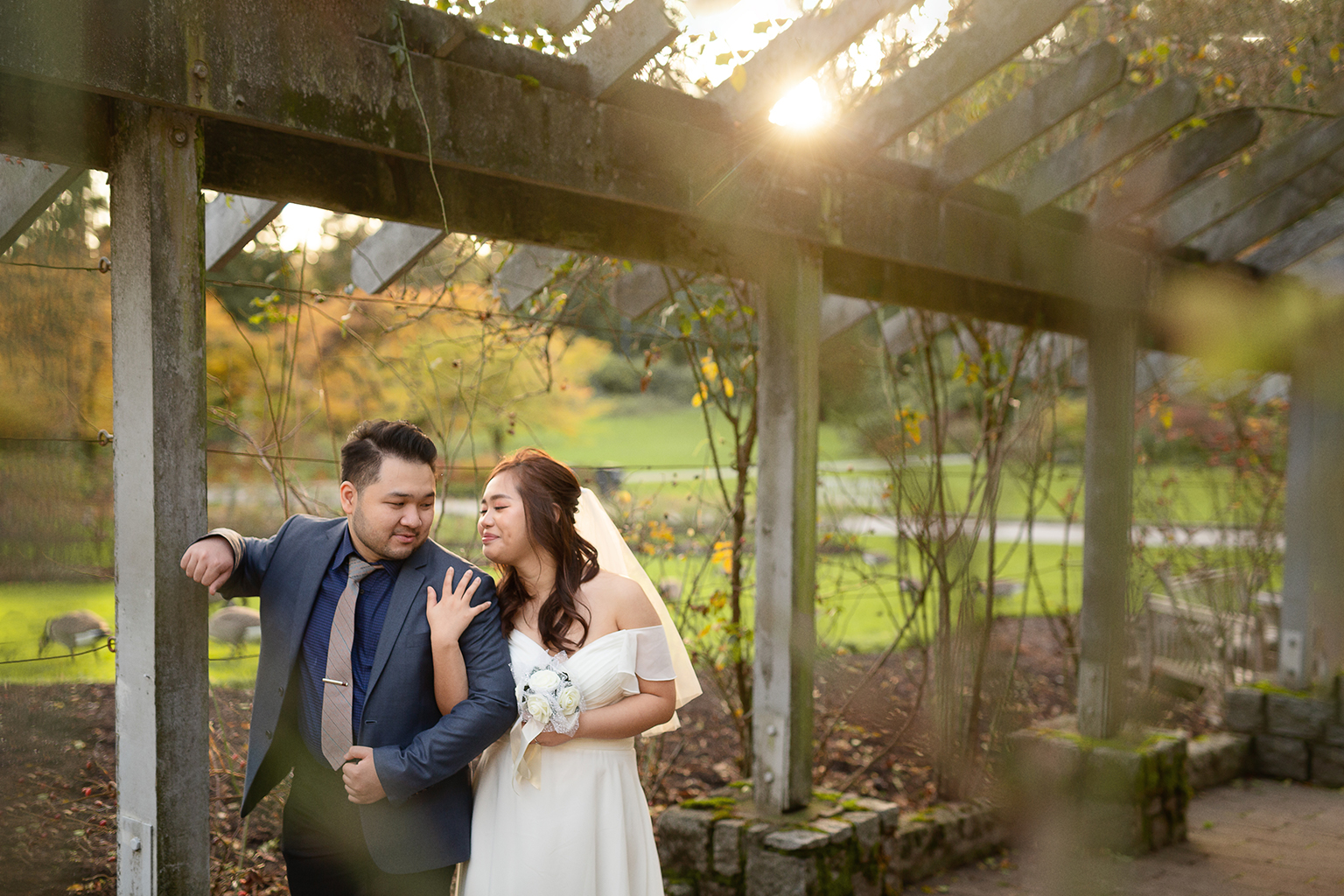 There is a lot that goes into taking good photos, but once they are captured by a camera, post-processing can bring out the very best in an image. There are two levels of professional processing I can apply to my images: Light processing, or Detailed processing. In both levels, I take care of brightness, contrast, sharpness, colour correction, noise reduction, removing chromatic aberration, bringing out details in highlights/shadows, and other global adjustments.

However, there are numerous issues that are best addressed with further processing. I talk about a sample of these issues below. For each example, I discuss the two levels of processing, and then show the photos before and after detailed processing.

Sometimes there are distracting elements in the image, such as some bubble gum on the ground. These things can be removed in Photoshop. However, some things are more easily removed than others. In this example, a dark branch points directly into the groom’s head.

Light processing: If the branch didn’t touch anything, its removal would be straightforward. A rough job would be attempted with a light edit. However, if the hair gets messed up, the edit would be reverted.

Detailed processing: The branch is carefully removed from the image, while the background is fixed. This particular removal requires that the hair detail be preserved so some delicate work is required.

In the next example, there is a van parked in the background. Due to the detail of the background tiles, this removal is complicated. If, say the background was a solid colour without texture, then the removal could be handled quickly.

Light processing: There would not be enough time to remove the van with this background, but the markings on the right column would be cleaned up.

Detailed processing: The van and its shadow are removed. The wall and left column are carefully constructed for a clean image.

Restoring Something That is Missing

In this example, my subject’s right side is clipped from the image. It’s a bit harder to tell due to the lighting, but once brightened, the clipped clothing is quite noticeable.

Light processing: There isn’t as much that can be done here, but the image could be cropped on the left to balance. This has the disadvantage of losing some of the top (or bottom) of the image in order to maintain the same aspect ratio.

Detailed processing: With detailed processing, I took the subject’s right shoulder from another photo and merged it into the original image while reconstructing the background. It was important to take care in making the transition seamless with the arm, hair, and background.

Sometimes there are unwanted skin blemishes in photos. However, it is important not to smooth the skin’s texture because that’s what makes skin look real. There is a way to address this problem in post-processing.

Light processing: There is a way to heal minor skin blemishes where a part of the skin from another area is brought to the area that needs healing. However, the colours are not always blended well. This is a limitation to the quicker skin healing techniques.

Detailed processing: I use a technique called frequency separation that allows me to adjust the textures of the skin independently from the colours. This technique also allows me to make other adjustments such as reducing dark rings under the eyes or removing strands of hair.

Cameras have specific focus spots that are not always aligned with the ideal framing of an image. In this instance, the original image is in focus but slightly off centre.

Light processing: A light edit would correct this by cropping away the left side of the image (and also cropping away the top or bottom to maintain the aspect ratio). This has the disadvantage of cutting away the environment or parts of the subject.

Detailed processing: Rather than cutting away the left side, I correct this by expanding the right and top of the image so that the image is better centred without losing the environment.

In this example, the photo taken is taken at a higher angle than I would have preferred (a lower angle was impossible because of the stairs and handrail under me). This resulted in the the columns being slanted and the couple looking a shorter than they are. However, this can be corrected in post-processing.

Light processing: The vertical perspective can be adjusted, but it would necessitate cropping the background slightly.

Detailed processing: I adjusted the perspective and filled the missing parts of the background. The columns are straightened and the couple is properly proportioned.

Our eyes are naturally led to the bright areas of a photo. In this image, the sunset and sky are much brighter than the couple.

Detailed processing: To address this, I selectively darken the sky, brighten the water and some of the mountains, and lighten the foreground. I also add a slight vignette effect to draw viewers’ attention toward the centre where the couple is standing. The detailed processing is far more selective over what aspects are brightened or darkened.

This has been a sampling of half a dozen issues that can appear in photos. There are other issues as well, but I hope that this serves as an introduction to the kind of things that can come up in image processing.

The main difference between Light processing and Detailed processing is the amount of time I spend correcting any issues. There are usually several issues within a single photo. With a light edit, I prioritize what to fix. With a detailed edit, I take care of as many issues as possible within the time frame (typically half an hour per edit). There is a range in what people prefer, but the ultimate goal is to have photos that you are most satisfied with.

Hope this has been helpful!